I have no clue who first tasted rhubarb and thought, “Why, if one only added enough sugar, this might be edible!” I do know that rhubarb didn’t become widely consumed until sugar became affordable.

Much like lemon and gooseberry, rhubarb is in a league of its own. Perfectly inedible alone. Wonderfully edible with enough sugar.

As a new Texas homeowner 22 years ago, I thought rhubarb grew like a weed everywhere. Not so. The foliage came up beautifully that first spring. It grew and grew and looked wonderful. Then summer hit. And the rhubarb melted back into the earth from which it had emerged, never to be seen again. I have since thought rhubarb impossible to grow this far south.

Alas, Texas A&M says it is possible! As an annual, not a perennial like northern gardeners grow it. Oh. And through the winter, not the summer. Basically, if you are familiar with growing rhubarb up north, turn everything on its head and you, too, can grow it Texas. Maybe some day I will try again to grow rhubarb. Until then, I will just buy it at the grocery store.

(Texas A&M also says that rhubarb is never eaten raw, which may explain why I still shiver when I think about eating it raw as a child.) 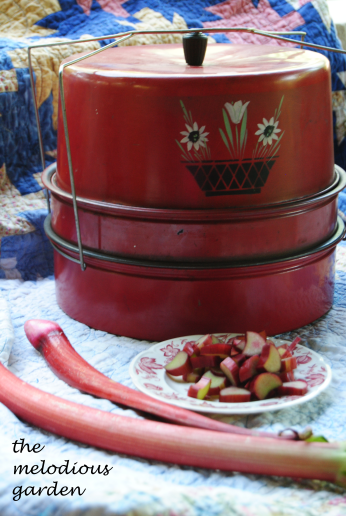 Place rhubarb in a greased 10-ince cast iron skillet. Combine sugar, flour and nutmeg. Sprinkle over rhubarb. Drizzle with butter and set aside. For the batter, in a large bowl, beat the butter and sugar until blended. Beat in the egg. Combine flour, baking powder, nutmeg and salt. Gradually add to the egg mixture alternately with milk, beating well after each addition.

Spread over rhubarb mixture. Bake at 350 degrees for 35 minutes or until a toothpick inserted in the center comes out clean. Loosen edges immediately and invert onto a serving dish. Serve warm.

Serve with whipped, cream, if desired.

(Rhubarb is technically a vegetable so eating the leftovers for breakfast starts your day off right. Just sayin’.) 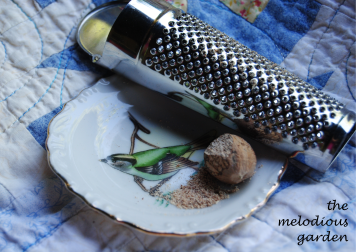 If you have never tried fresh ground nutmeg, you must… It is so much fresher than the ground spice bought at the grocery store.